When a lifelong dream becomes a reality, I believe that one of the best ways to preserve those precious memories is to put the experience down in words. A diary, a notepad, or in this case, a blog, are great tools for remembering, sharing and reliving those highs and lows that come with an extreme adventure, and as we share our Kilimanjaro Climb story over the coming days, we hope it encourages you to share your own.

The thing I had been dreading the most about this night, was the temperature.  I do not like the cold, and the thought of getting out of my sleeping bag and heading into the freezing midnight air was not something I was looking forward too. However, as with most things in life, the thought was actually far worse than the reality – and I didn’t even feel the need to wear the bulky down jacket I had insisted on carrying all week-long!

After a quick cup of sweet tea and a couple of biscuits, Mathew and his assistant guide Paul, led the way onwards and upwards towards our ultimate goal – Uhuru Peak.  The night was mild, the wind was low, and as we had booked our Kilimanjaro climb to coincide with the full moon, we were able to turn off our headlamps and walk in the soothing glow of the moonlight.

Almost immediately, the gradient increased dramatically and we were left in no doubt that the way to the ‘Roof of Africa’ was going to be very steep indeed!  There was quite a lot of traffic on the mountain, I would guess around 60 other climbers were summiting that night, but the mood was calm, and there was hardly a sound as we all made our way, up, up, up.

The first 3-4 hours seemed to pass extremely quickly, but our pace was exceptionally slow and we were told to “walk like a chameleon.”  Mathew went up front to set the pace, I came second, Ingo third, and Paul was the final link in our chain as we moved up this magnificent mountain.

During the first 4-5 hours, we made just two or three brief water breaks, and while none of us were ‘chatty’, we constantly checked on each other to make sure everyone was doing fine.  After 5 hours and above 5,400 metres, the oxygen in the air seemed to disappear, the temperature dropped, and the mood of our small group seemed to change – we were now out of our comfort zone – and into something I don’t think I will ever be able to describe.

Ingo was still doing brilliantly at this stage, but I was struggling to breathe.  The air seemed far too thin, and I was literally gasping for enough oxygen to power my legs up the soft and uneven scree.  I didn’t feel ill or sick in any way, but the lack of air was frightening and I could feel my heart pounding through the 6 layers I was wearing on my upper body.

Before long, we asked Mathew the question we knew he was dreading to hear “how much longer do we have to go?”  “Let’s just keep going,” said Mathew, and while we could see the summit getting nearer and nearer, we knew there was still a long way to go.

At around 5.45am a glorious rose-pink glow shone behind the horizon, and we knew that the sun was on its way.  At this point, we seemed to get a new burst of energy, as if we were to get to Stella Point in time to watch the sun come up over East Africa, we needed to get a move on! 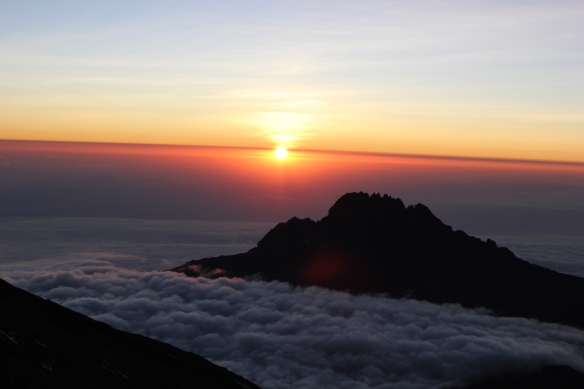 Walking in Scree is like walking in quicksand, you take a step forward, and slip half a step back, so double the determination and double the energy is required to get through it.  However, through it we got, and at 6.30am on Thursday 4th October 2012, Ingo and I made it to Stella Point – a whopping 5,739 metres above sea level!

So overwhelmed, we were unable to speak, but after big congratulatory hugs and a few tears of joy, we watched the most beautiful and breathtaking sunrise I have ever seen.

However, our journey to the top of Mount Kilimanjaro was not over… and after a quick cup of tea (Mathew had thought of everything!) we carried on to Uhuru Peak.  From Stella Point to Uhuru Peak the trek is an easy one, the sun provided us with much-needed warmth, and despite being absolutely exhausted, we made our way along the flat ridge to the bright green sign for those cherished photographs that every ‘Kili Conqueror’ has in their photo album. 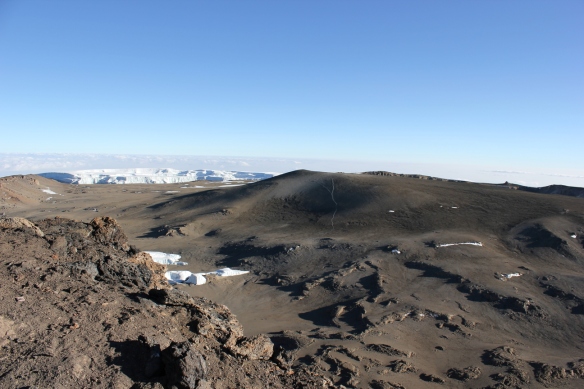 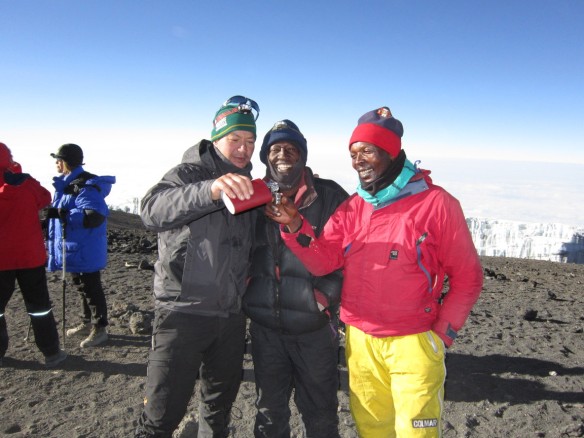 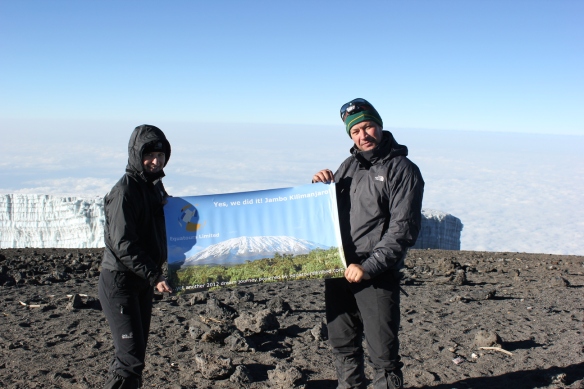 My plans to take hundreds of photo’s and make a video just didn’t seem so important as I stood atop Africa’s highest mountain, and as I looked around at the striking glacier, the seemingly bottomless volcano, and mother Africa beneath us, all I could think was – WE DID IT, WE REALLY DID IT!